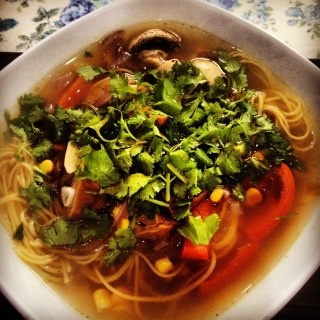 There was a bit of a shopping fail this week, as I’d planned to make fake chicken noodle soup for lunch on Sunday but upon opening the freezer realised that we had no quorn chunks left, d’oh. I did however remember that there was a tin of mock duck languishing in the cupboard where it had lain for months. It made for an excellent and very tasty soup. So now I need to buy another tin to replace the one I used!

Place the stock into a large pan and add the noodles, onion, garlic and ginger. Season with soya sauce and the chinese five spice powder. Add all the other ingredients, apart from the pepper and mushrooms, and cook for 3-5 minutes until the noodles are done. Add the mushrooms and pepper and heat through for a further two minutes. Serve in large bowls garnished with the coriander and chillies to taste. Delicious.