In these uncertain and unsettling times I’m struggling to eat. I’m also hyper aware that I don’t want to waste any food at all. This smoothie delivers a healthy boost of fruit; is easy to drink if you’ve no appetite and uses up some bananas that are too ripe for me to enjoy as they are. You can use whatever ingredients you have to hand. These were in my freezer/cupboard.

For one portion you need

If you have lots of ripe bananas, peel them and freeze them. If you use frozen banana you will need to add more liquid as it will thicken a lot.

This tastes like cough syrup, in a good way! Created to celebrate the arrival of spring and cherry tree blossom. And also because the husband forgot to chill some wine for me (after I’d forgotten myself too, epic fail!).

For one potent martini you need

Shake everything together over ice and decant into a martini glass. Serve garnished with a slice of satsuma and a cocktail cherry. Drink.

Here’s the blossom that inspired it 🙂

Why should martinis get all the fun eh? Sadly no chaser of prosecco to follow, just a healthy dose of fruit and vitamins.

For one portion you need

Place everything apart from the passion fruit in a nutribullet goblet and blitz until smooth, about 1 minute. Pour into a serving glass and garnish with the passion fruit. Drink. Pretend this has undone all the bad things you have eaten and drunk over the festive period and beyond.

This is refreshing, and quick. Add as much sugar as you want to taste. I like mine sharp and sour.

Place in a blender. Blend. Strain. Drink. That is all…

Tesco’s strawberries were rubbish yesterday and they looked so sad today that I had to use them up in something other than eating them au natural. I macerated half of them as L adores those on pancakes and the others went into this. Add sugar/agave nectar/maple syrup if you want but I kind of like the sharpness of just using fruit and soya milk. Clearly this can be made with milks other than soya but I happen to like soya milk…

Lob everything into a blender and blitz for 2-3 mins till smooth and frothy. Enjoy 🙂

Yeah I know I blogged a mocha one last week, but this is also worth trying. Honest.

Place everything in a blender and whizz till smooth. Serve in a long glass and enjoy the buzz.

It’s hot today. And I am very tired. Time for a cold coffee…

Make the coffee and chill it well. Place everything into a blender goblet and blitz till smooth. Drink. 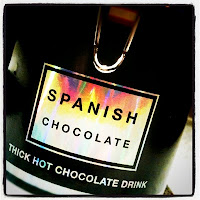 I first experienced this in Morocco when we tried to get Lex his usual hot chocolate before bed. Placing a cup of basically runny, hot, chocolate pudding before an over tired five year old who was expecting more of a chocolat chaud was a baaaaaaaad move! He did not like. At all. But mummy did. He appreciated it more when we went to Granada, Spain a couple of years later. And then we discovered you could buy tins of the lovely stuff in the UK. Sorted.

Heat the milk till scalding (it MUST be absolutely boiling hot). Pour in to a cup and stir in the powder. Keep mixing till it thickens. If it doesn’t the milk is not hot enough and/or you need to add some more powder. Serve with churros for the ultimate breakfast! 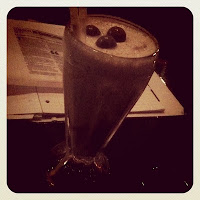 I had one of these amazing beasts at the wonderful Kyoto Lounge bar yesterday. I shudder to think about how many calories were in the glass. But it tasted delicious. This was a pretty reasonable recreation. But the photo is of the original.

For one person you need:

Place everything in a blender. Blend. Drink.

I am addicted to this. It’s the soothing, warming, inner core fug of happiness it distributes and it dissipates I think 😉

Place everything into a pan and heat gently until the sugar has dissolved and the spices are aromatic. Serve warm in glasses and spread seasonal good cheer 🙂