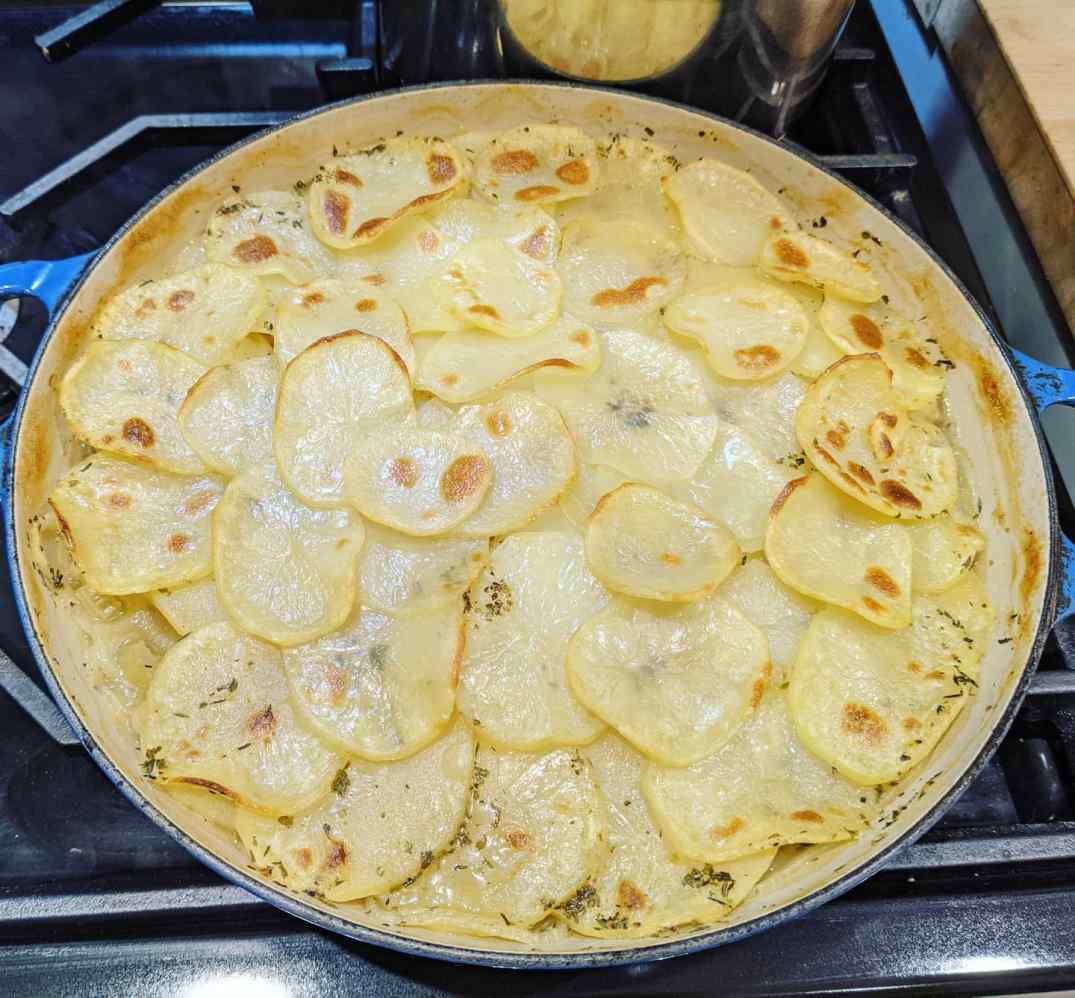 I’m embracing autumn. Stews, dumplings and potatoes are featuring heavily on our menu at the moment. This hot pot takes 10 mins to throw together and can be left to gently cook in the oven for an hour. Perfect for working from home days. Serve with lashings of cabbage for internal central heating ☺️

For 4-6 portions you need 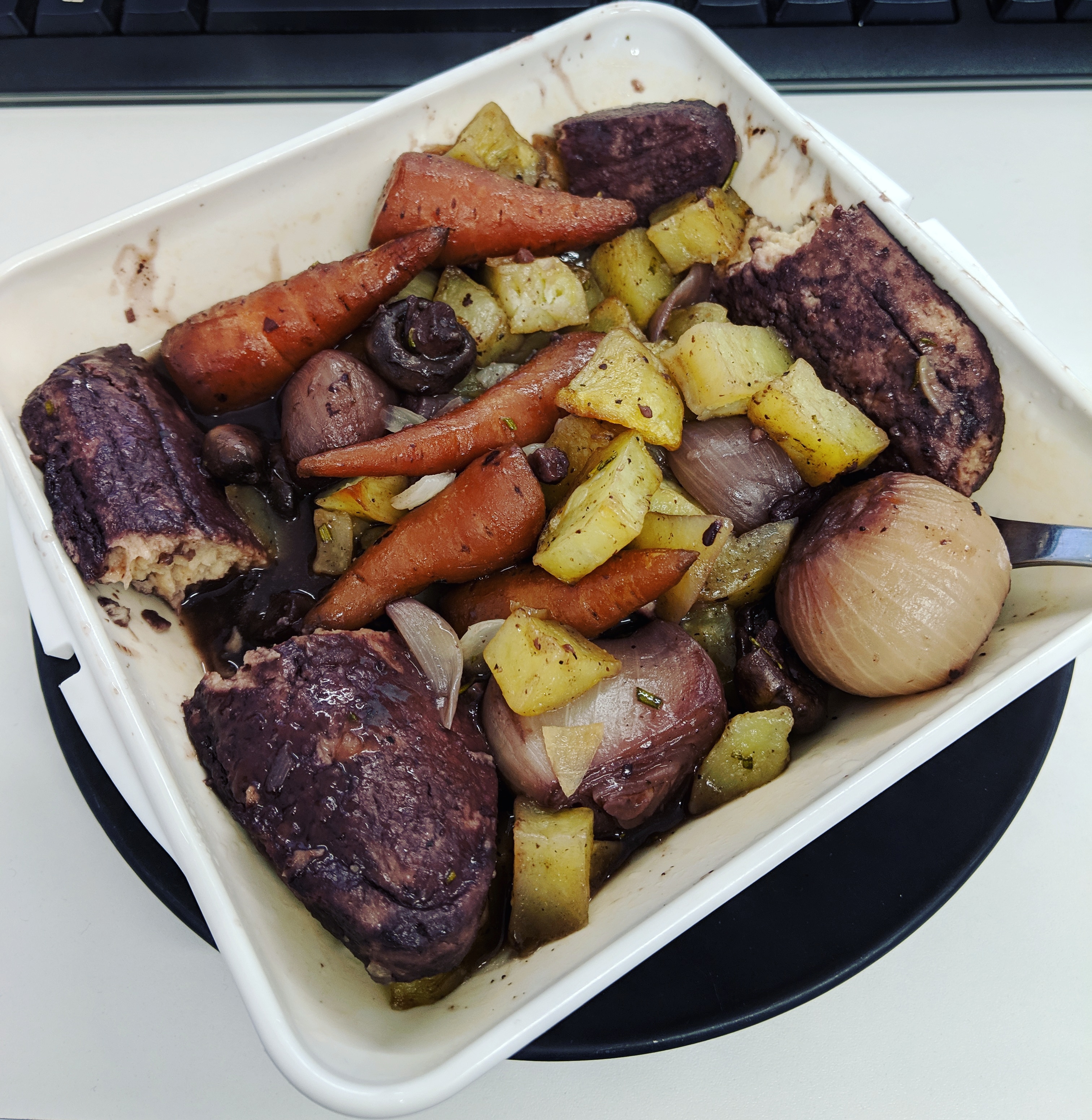 I’d been craving this for ages, and after searching recipes on the internet didn’t find one that exactly met my requirements so I concocted this. It was delicious. I recommend making it a day or so ahead of when you want to eat it to let the flavours develop and mingle. Perfect January comfort food.

For six portions you need 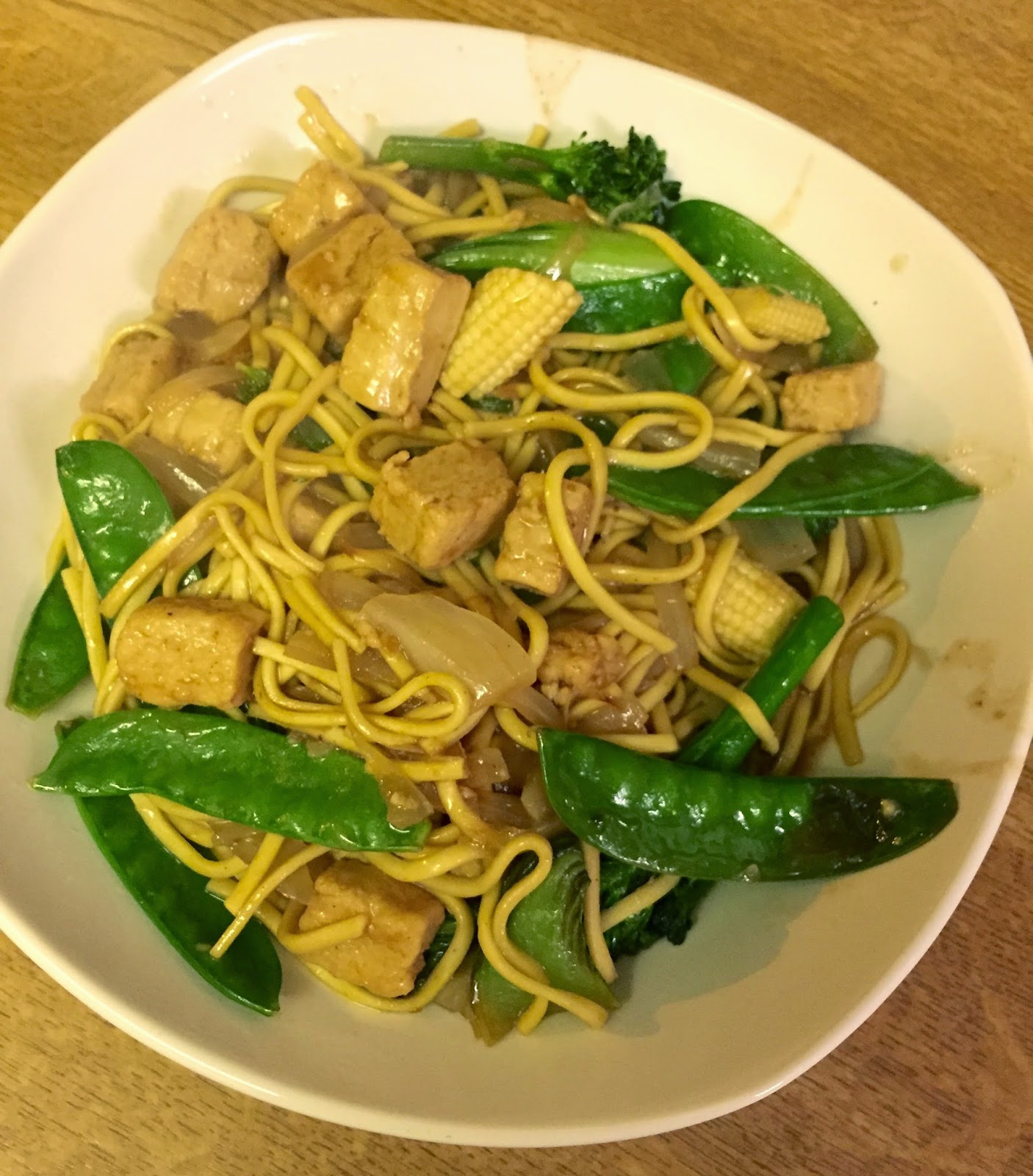 This is a cheat recipe really seeing as it uses ready made sauce and pre-cooked noodles. But we all need a 5 min dinner some nights of the week don’t we..

Yes, this really does involve you having to prepare an onion to begin with. Sorry.
Slice the onion and add to the wok with any harder veggies e.g. broccoli or carrot. Stir fry for 2-3 mins and then add the quorn chunks and the rest of the veggies. Stir fry for a minute then add the noodles and the sauce. Cover with a lid and toss about to ensure everything gets covered in the sauce. Tada, serve and scoff. A speedy and filling but good for you supper.
January 9, 2015June 10, 2015 by veggieg3ek Categories: chinese, easy, noodles, quick, quorn Leave a comment 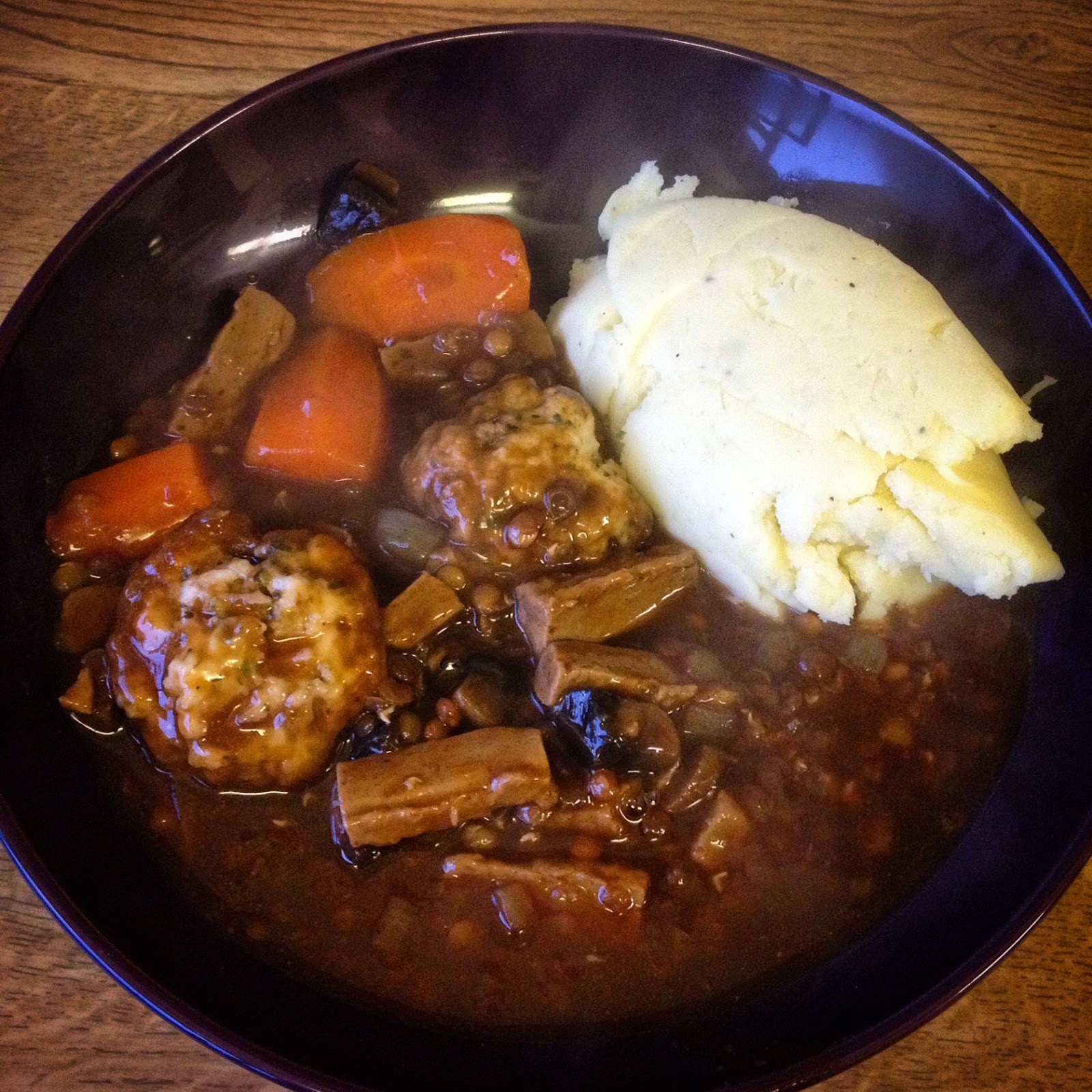 Autumn is for eating hearty stews that warm you to the cockles of yer tum. And one of the things I miss most about not eating meat is a rich, warming beefy stew that’s been cooked for hours and hours. But despair not, if, like me, you’re a bad meat craving veggie, this stew will satisfy the most beefy of cravings and leave you with a warming internal hug. The dumplings are the crowning glory for warm doughy loveliness and soak up the yummy juices as it all cooks away. Simple and quick to prepare, it’s also ready in less than an hour.

Begin by frying the onions, carrots and mushrooms in the oil for about 10 mins until the onions are softened and the juices have run from the mushrooms.

Add the lentils, quorn, beer and stock and bring to the boil. Season and add the ketchup. Cook for about 20 mins until the lentils are cooked.

Mix the dumpling ingredients together and form into 8 balls. Place on top of the bubbling stew mixture and cook for 20 mins. Serve with mash and curl up in front of the fire! 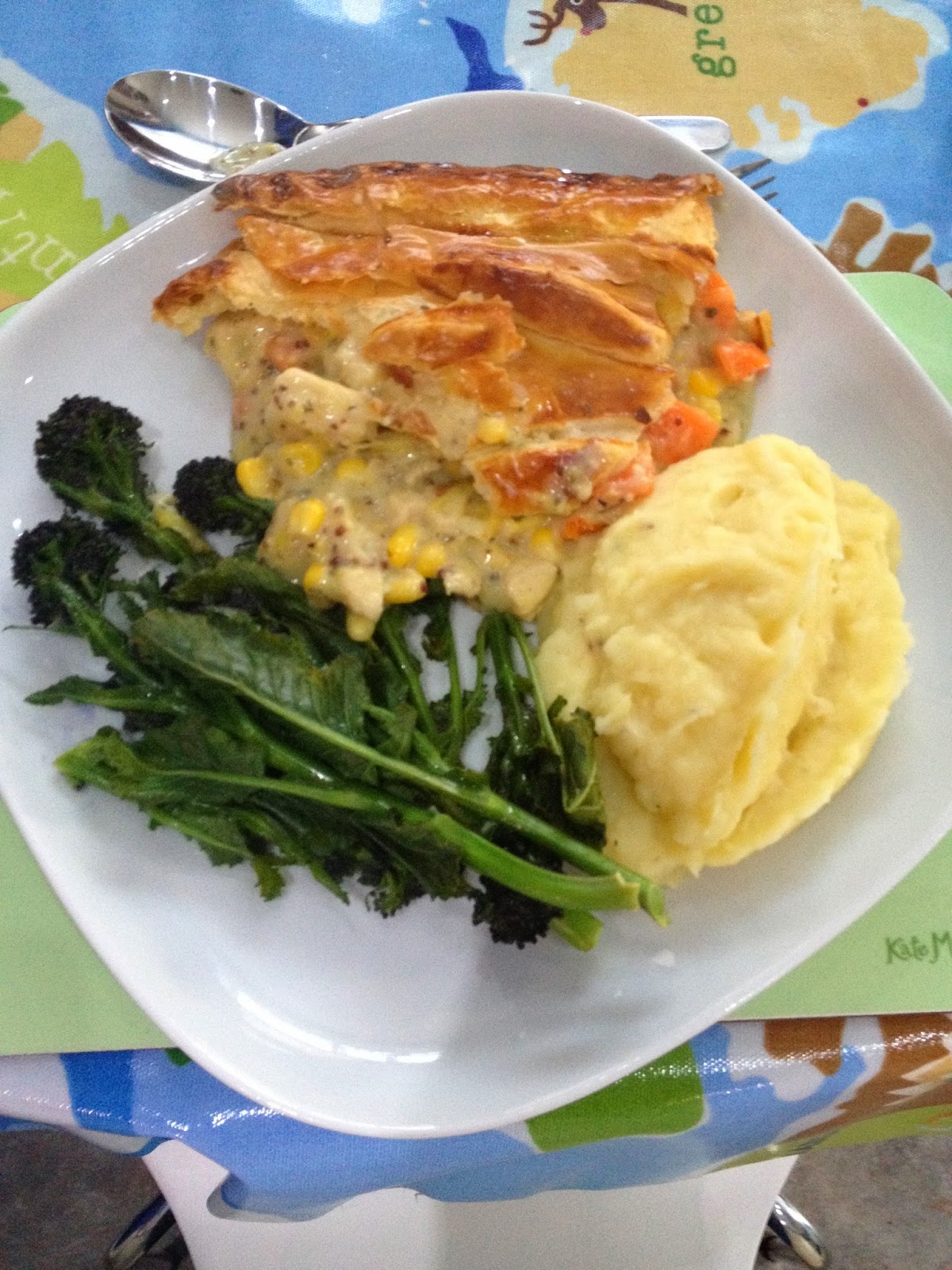 Mmmmmm. Pie. Just as well I was already a dab hand at pie making before falling in love with a Wigan-er 😉 This pie works well with any sort of filling, and if you omit the quorn and use pulses or seitan or something instead for protein it is vegan. Result.

Begin by frying the leek and carrot in the oil for 3-4 mins. Cover with the stock and cook out for a further 5 mins or so to ensure the carrot is tender in the finished pie.

Add the quorn/protein and sweetcorn, mustard and wine. Season to taste. Reduce the heat and add the soya milk. Stir through the cornflour mixture and stir over heat until the sauce is as thick as you want it to be (the longer you cook it for the thicker it will become).

Transfer into a pie dish and preferably leave to cool for an hour or so before topping with the pastry. It doesn’t matter if you can’t let it cool however.

Crimp the pastry and then brush with egg/milk and bake in a hot (200 degree) oven for 45 mins or so until piping hot and golden brown. Serve with veggies and mash and most importantly GRAVY! The fastest way to a pie eaters heart 🙂 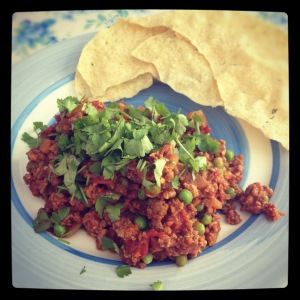 I’ve made this a few times now and it’s rapidly becoming a store cupboard staple on days when you have that frantic back-home-from-work-desperately-hungry-but-no-idea-what-to-cook moment. Cook this. It takes no more than 20 mins from start to finish, and tastes amazeballs. What more do you need 😀

Begin by frying the onion in the oil for a few mins. Add the curry paste and garlic and cook out for a few minutes more. Add the quorn, tomatoes and peas and bring to the boil. Leave to simmer for 10 mins until everything is cooked through. Serve with poppadums and whatever else you fancy. It’s even better the next day with chips 😉 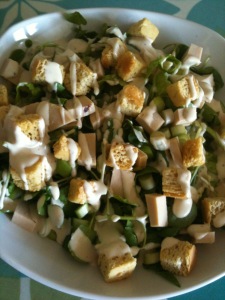 I love quorn roast and like to use the leftover bit in a veggie version of caesar salad. Make sure whatever dressing you buy is veggie friendly (or make your own with mayo, a little hendersons relish and some white wine vinegar).

Place the lettuce and watercress into a large shallow bowl. Top with the cucumber and spring onions. Sprinkle over the quorn roast and croutons and top with the dressing. Enjoy.

Oh my. Oh my indeed. Yes I know it’s not modest but I *am* an utter culinary genius if this pie is anything to go by (and I am also blogging this rather pissed…!). I had been hankering after a lovely, creamy, rich fake chicken and mushroom pie all xmas so this is what I made for dinner last night. It was lovely.

Begin by frying the onion in the oil for about 5 mins. Add the mushrooms, and taking note from Julia Child DO NOT CROWD THE PAN ;-). Cook for a further 5-10 mins until the mushrooms are lightly browned.

Add the quorn and sprinkle over the flour and cook for 2-3 mins. Add the wine and boil briefly. Add the stock and the cream and parsley and cook for another 2-3 mins until the sauce is thickened and lovely. Check the seasoning.

Place the filling in a pie dish and top with the pastry. Decorate as you wish, not forgetting the steam holes, and brush with egg glaze.

Bake in a hot oven for about 30 mins until the filling is piping hot and the pastry is risen and golden. Serve with mash and veggies.